The stereotype of the Indian engineer 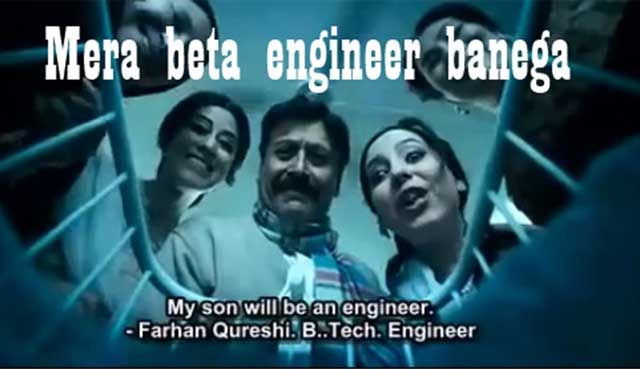 A few days ago Shreyank and I watched the documentary "Alma Matters – Inside the IIT dream" where, in 3 episodes, is presented (part) of the reality of the Engineering students of IIT Kharagpur University (India). From the very first minutes, I thought about the many young people I met in India, and how, naively, I made fun of them all studying engineering or economics . With a few more years of India and social sciences on my shoulders, I realized that maybe that comment isn't as light as I thought.

So I decided to find out what's behind stereotypes like:

"But you Indians all study engineering!?"

"Indians (and Asians) are good at math"

Then understanding with this story what binds these three words together:

INDIA HAS AN IMPORTANT MATHEMATICAL TRADITION...IGNORED!

"India is thought to be the country of irrationality and religions"

"India has a very long mathematical and rational tradition. For example, the greatest atheist and agnostic literature is that in Sanskrit, which may seem strange given that India seems to be the homeland of religions "

We forget it, or maybe we don't know it, but the numbers we call “Arabs” are actually Indian. The Arabs gave them to "us" (Westerners), but they were taken by the Indians. Even zero is an Indian invention! "

Still talking about arithmetic, Indians, in the Vedic Era, deal with the concept of the infinity of numbers, irrational numbers, prime numbers, roots, and negative numbers, and many other things of which, however, I am not an expert.

-> I leave you this (long) video to find out more (ITA only): The Mathematics of the Indians..

Regarding geometry, Indians have developed abstract geometric shapes especially for ritual purposes, for example, concepts such as mandala, yantra, mantra, tantra and so on...

Not to mention math games: does chess tell you something? Yes, the game of chess comes from the Indian game Chaturanga. And many other board games (I think of the Ludo game) and the famous mathematical tables that are also found in Hindu temples.

India then has always been at theforefront in mathematics and geometry, even before modern history with Colonialism and Capitalism took hold of it, making us forget or ignore the important contribution of India in the mathematical sciences.

WHAT IS AN IIT?

First a little history: India was officially a British colony from 1858 to 1947, even if already in 1784 the East India Company had begun to occupy the territory.

With the first contacts with India, people began to talk about this country, to try to understand its culture and basically be able to exploit (and dominate) it.

With the division of the world into conquerors and colonies, West and Eastdeveloped and underdeveloped countries, the image of India was created as a mystical, poor, backward, and above all irrational country. Leaving their important scientific contributions in the shadows. (Orientalism)

In 1947, however,India became independent and for a while there had been an air of change. From that moment, and still today, the history of India will be influenced by post-colonialism and the strong desire to demonstrate that India is as capable, if not superior, as the other leading countries.

One of the examples of this desire for redemption is the creation of the IIT: Indian Institute of Technology, shortly, like the italian Politecnico. With the Independence, India wanted to aim for the progress of the country through technology and not through capital!

The first IIT was in Kharagpur, born in 1950 in a former detention center of the colonial era, not surprisingly. In 1956 the Indian Parliament declared the IIT, research centers of national importance with theInstitutes of Technology Act 1961, and the First PM, Nehru, in his first visit to Kharagpur said that

"here is the most important monument of India, which represents its needs and the future ".

Over the years, other important IITs were born, such as that of Mumbai, Kanpur, Madras, Delhi… until the recent openings in 2016 in the states of Goa and Karnataka. The birth and development of IITs is therefore an ongoing, constant and strategic process (also from a geographical point of view).

"MY SON WILL BE AN ENGINEER"

It is not surprising then to understand that in the collective imagination in India the profession of engineer has begun to be thought of as a substantially patriotic and a profitable profession, which could therefore help many families to emerge from the state of poverty.

However, placing this weight and responsibility on the new generations of students.

In the famous Bollywood movie "3 Idiots(which I absolutely recommend!), The psychological pressures faced by IIT students are told, even if fictionalized, and other related problems and criticisms are addressed, including depression, suicide, very high competition, and the lack of inclusive teaching. And the impossibility of choosing a career that truly reflects their passions (which is nothing but a privilege).

In the documentary "Alma Matters" we go deeper also talking about sexism (there are very few women in the IIT), the very low admission rate (which is lower than that of Harvard), the strong feeling of isolation (students often study in Campus isolated), and the identity crises between expectations of the family and the whole community, their aspirations and belonging to the world of IITs ... and last but not least, aneducational offer that reinforces all this. Obviously, the positive sides are also shown, such as the strong sense of community among the companions and the involvement in artistic and/or sporting activities.

The stereotype of "Indians good at math" and "Indians all engineers" is not as positive and naive as one might think.

First of all, it is a racist stereotype because it implies that (Asians) are good in mathematics based on their ethnic origins. And it is a harmful stereotype that only increases the pressure on the new generations, even from those who do not experience Indian society and culture from within.

In the context of immigration, for example in the USA and Europe, these types of stereotypes lead to the formation of "model minorities" or the idea of accepting foreigners only on merit: "if you are a perfect foreigner, we accept you, otherwise, we won't”.

The concept of model minorities is dangerous because it imposes great pressures and expectations on the minority group to "perform well", also creating strong internal and external tensions, with other groups for example.

Furthermore, stereotypes involving the mathematical skills of Asians are aimed at portraying them not as people but as machines., dehumanizing the subjects of this stereotype. Terrible. Fertile ground for discrimination and racism.

Thanks for reading this far! I await your comments. Here are 3 movie tips:

THE MAN WHO KNEW INFINITY